As China and Chinese communities around the world celebrated the beginning of the Year of the Rabbit on February 2nd, we joined the party in Singapore.

We started with a traditional dinner of 饺子(steamed dumplings) in a simple eatery in Geylang. There, dozen of migrants workers were standing in the street, watching the Chinese program on T.V, and enjoying their holiday.

We then made our way to Chinatown. The main road was closed for the festivities and it was so busy we decided to skip the organized entertainment and to wander in the streets instead.

Close to the People’s Park, locals were hosting their own talent show with young singers, and older men were concentrating on chess games. There were so many people in the narrow streets that we could barely move! People were doing late shopping, buying good luck diamond-shaped “福” (“auspiciousness”) calligraphy, traditionally hung upside down to symbolize the arrival of luck. There were literally hundreds of red (the symbol of joy) and gold decorations available for a few dollars in the many shops around the temple. People were also buying 红包, red envelops in which are put banknotes (the newer the better!), presented to children and young adults. Dragon dances were also held in the street and you could hear the drums from far away.

Late in the evening, the crowd gathered at the Buddha Tooth Relic Temple and we followed in as the rain started to pour. We lit incense sticks and made a couple of wishes.

At midnight, we bought small firecrackers in the street and smoke filled the main avenue as dozen of bigger firecrackers and fireworks burst simultaneously.

You can see the complete set of pictures taken in Singapore on Flickr. 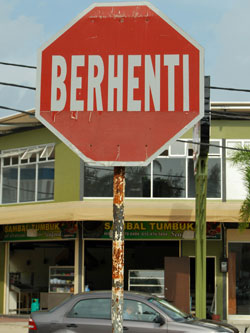