Do You Want To Argue ? Pleeeeease…

I recently came across a top 10 debates list, seen on My Top Ten Lists:

1. Pro Choice Vs. Pro Life
2. Antiwar Vs. Pro War
3. For or Against Death Penalty
4. Breastfeeding Vs. Bottle feeding
5. Democratic Vs. Republican
6. Evolution Vs. Religion
7. For or Against Gay Rights
8. Natural Births Vs. C-sections
9. For or Against Prayer in Schools
10. Separation of Church and State Debate

I first started to debate when I was about 15 years old. French education value essays, which we had to organize in to 3 parts : introduction, development and conclusion, each part being itself divided into several paragraphs etc. We trained for several years, practicing with non-politically correct subjects, such as “Why is DUI a blessing for the society”, “Is school really useless ?” etc. Just to show us that anything could be argued.

Anyway, we always stayed in the safe-zone. Peace is good, war, world hunger are bad and so is AIDS, the US are wrong and Europe is the good one. Who could blame us ? Growing up in a country, everybody is short-sighted. Nobody truly knows the neighbor. We were just brainwashed.

When I went to China, my whole world just crashed. Not only I was seen as an immigrant and a foreigner for the first time of my life (a European visiting another European country isn’t really a foreigner…), but I also realized that everything I’ve been told about China was wrong. Europe values politics and has a “being against everything” attitude, while North America values individualism. Well, China value the country’s well-being and interests before the individuals. Seen from this perspective, everything made sense. The one child policy was merely one way to manage the country’s booming demographic, nationalism was a reaction to years of foreign invasion, and CCP’s propaganda wasn’t worse than western political campaign’s. Wow. Talk about a shock.

Each backpacking trip I made since then brought more questions about the world we live in. Getting to understand our neighbors I guess. How could I blame South America’s street corruption ? It’s just another form of economy, probably less hypocritical than whatever big corporation lobbying in Europe or North America. How could I blame Mexican for sneaking into the USA ? Weren’t they allowed a share of the cake placed on the table in front of them ? Drug trade in South America ? Let me just remind you who was trading opium a little over a century ago in China… That’s right, United Kingdom. Are you against terrorism ? Well, me too, but at least I’m honest enough to admit we started the whole thing by invading half of the world, forcing people to adopt roman Catholicism as their one and only religion and ruling over what’s good and bad for many centuries.

Give me a break. Who are we to decide who is right and who is wrong ? It sure is much easier to be conservative and to hold on to self-proclaimed values and much harder to question everything and to adapt to the situation.
I remember one night in Central America, had this big fight with Feng over politics. I was still big on politics at the time.

Anyway, for the first time of my life, I was meeting someone who didn’t believe in left-wing nor right-wing. Shit, what was I supposed to say to fight back ? The initial argument took an unexpected turn. I though that everything was political and had no clue there were some beliefs not linked to either. I was expecting some kind of conventional reply, like “left-wing is great” and “let’s free Tibet” – instead, I got an heated Feng who was dismissing politics and probably praising dictatorship (although he might have praised monarchy or anarchy – depends on the mood). I realized that my country and culture had imprinted something into my brain. I was brainwashed too. I took some stuffs for granted, had a taboo over others and that was my philosophy. No as open-minded that I thought.

Truth is, one has to adapt to his environment. This was what I’ve done wrong. I carried my French beliefs – to a certain extend – across the world, and my Parisian politics weren’t applicable here. Feng didn’t know and didn’t care about politics and he was easily dismissing my belief. I had to fight with other weapons to reach the target.

We still practice arguments to this day, mostly for the sake of it. I sometimes get extremely frustrated over what I consider “cheap shots”. We would start arguing about something and Feng fires up, blaming everyone and everything. I learned to fight back and to use my knowledge about the world to interpret it my way rather than answering some stimuli.

Does arguing hurts ? It sure does. Nobody likes to admit being wrong and to reconsider his beliefs. It is useful ? Yes. It only we would be less short-sighted… 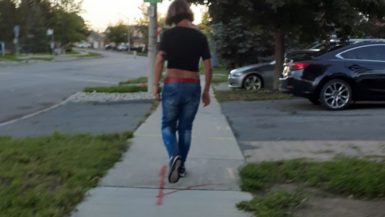