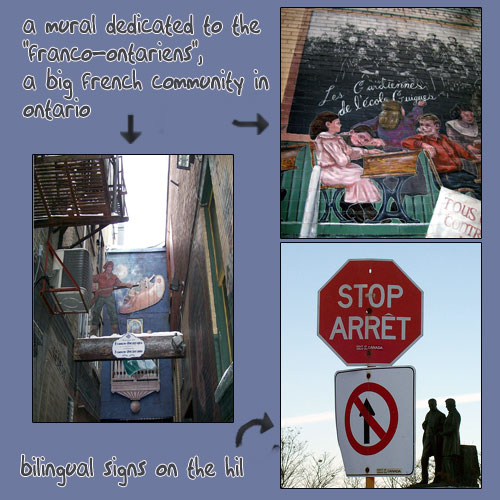 Canada is now a multicultural countries, but was founded by French and English settlers. As I wrote a few months ago in Two Solitudes And One Loneliness, the language issue is complex and highly political. It’s also one of Canada’s most touchy subject, so it’s hard to speak without offending anyone.

The province of Quebec’s official language is French, and the province of New-Brunswick is officially bilingual. For the other provinces and territories, it’s a bit of a grey area… English is most widely spoken but there are French communities almost everywhere: in Ontario (the Franco-Ontariens), in Manitoba, in Alberta…

French’s history in Canada is quite painful. English has for long dominated the country, economically, politically and socially. But starting in the 70’s, a bilingualism politic became one of the cornerstones of the government of Pierre Trudeau.

The first Official Languages Act was adopted by Parliament in 1969. Its three main objectives were: the equality of English and French in Parliament, within the Government of Canada, the federal administration; the preservation and development of official language communities; the equality of English and French in Canadian society. The principles of bilingualism in Canada were also protected in the Canadian Charter of Rights and Freedoms of 1982.

It is today wrong to say that the whole country is bilingual, but it is also wrong to deny the obvious progress. It is now easy to get service in both French in English at the federal government level, and more and more young people are educated in both languages. I’m pretty optimistic, and a language politics takes time to take effect in my opinion.

This “stop/ arrêt” sign on the picture (“arrêt” is French for “stop“) was found on Parliament Hill. This is an example of the bilingualism politic at the provincial level.

Funny thing though is that the stop sign in France is just… “stop”. Yes, “stopper” is a verb in France! I had never seen “arrêt” signs before I came to Canada and most of my friends back home find it quite funny.