I was one of these people who used the trendy “stay safe!” email signoff from March to early May. I saw it as a way to acknowledge the shared crisis, but I meant it as well—the global goal was to protect yourself and the community against COVID-19.

Three months later, it feels that “stay sane!” should be the new basic social formula.

On June 12, most of Ontario (sorry, Toronto!) finally moved onto Stage 2 of the province’s reopening plans. Most stores (including shopping malls and hair salons) welcome customers, restaurants and bars can open for dining in outdoor areas only, and recreational spaces are okay to use. Daycares were also given the green light, although from what I’ve heard logistics are complicated and it’s a work in progress.

Plenty of places are still closed (or went bankrupt, e.g. many restaurants and retail stores), including movie theatres and gyms, not to mention other measures not yet lifted, like travel restrictions within Canada, limits on social gatherings, etc.

Some people feel it’s too soon to reopen, others complain it’s too late for the economy—it really depends on who you’re talking to and reactions can be surprising. For instance, I chatted with an elderly woman taking a walk in a park and despite being “at risk” she was looking forward to resuming her normal activities, whatever they were. On the other hand, I also know younger Canadians without underlying health conditions who would rather stay home and avoid contacts outside their household.

I’m not judging. It’s an unprecedented situation and we all deal with it differently.

This may explain why the atmosphere was so tense in the days leading to stage 2. For some reason, I found myself interacting with plenty of semi-strangers in the neighbourhood instead of just nodding at them from afar or ignoring them politely, the Canadian way. A lot of frustration was expressed, from exhausted parents to lonely and bored people. “I thought this shit would be over by now!” one of Mark’s friend’s mom complained.

The sky is blue, the sun is shining, we’ve been baking under a heat wave for a week (for real, it’s about 35 °C). Any other year, Canadians would have been easing into summer with a smile on their face, looking forward to Canada Day and fun outdoor activities.

Just not in 2020 for obvious reasons.

I didn’t think our very, very gradual reopening plans could be more stressful and weirder than seeing your entire city… I mean, country… I mean, the world shutting down—yet I’ve been feeling anxious for the past couple of weeks.

Do you also have to make executive decisions twenty times a day? It’s exhausting, isn’t it?

I can’t reconcile the news, recommendations, pandemic graphs and international restrictions with… well, life. I’m spending my time queuing outside stores to limit chances of being around people once inside. Schools are closed, summer camps may or may not happen and come with pages of fine print, but kids now play happily together at splash pads and in parks. I’m supposed to join a ten-people max “bubble” which both sound like a lot of people and very few if you factor in children, but it’s okay to go protest with thousands of strangers. Test accuracy is questioned yet we should ramp up COVID-19 testing. Europe seems to be getting better while our southern neighbours just went “fuck it” and are apparently planning to shoot the virus rather than use common sense. I’m so tired of hearing about COVID-19, yet I’m checking the news compulsively because surely, something must have changed in the past… ahem ten minutes?

For me, like for many others, the lockdown wasn’t a careless staycation. Yes, I’m stressed out and tired—tired of multitasking and tired of not being able to plan anything.

My stance on the virus hasn’t changed. I don’t think it’s going to disappear and a vaccine seems unlikely. I will do what I can—and not whatever it takes—to stay healthy, knowing that I’m probably in the queue for the mandatory ride at one point anyway.

This doesn’t make me that anxious.

Despite a natural tendency to question authority (thank you, maman) and a strong belief in long-forgotten principles (the whole “all human beings are born free and equal in dignity and rights” thingy, thank you papa), I don’t actually rebel that much and I tend to follow most rules. It’s not a huge sacrifice, really—I’m lucky to be a citizen of two democratic countries that provide civil liberties and institutions we can usually trust. Even if I don’t agree with some politics or leaders, changes that affect us all go through many stages of approval and citizens have a voice in the process.

This hasn’t been the case lately. States of emergency were declared around the world and at many levels. Freedoms and human rights were impacted, most notably freedom of peaceful assembly and freedom of circulation.

I understand why such decisions were made. But by nature, a state of emergency must be temporary. How long is it acceptable for freedoms to be suspended?

I’m getting scared. Although it seems far-fetched in Canada, I worry about governments around the world resorting to the use of force to enforce restrictions. At one point, people aren’t going to comply willingly.

I keep asking myself a lot of purely rhetorical questions. Let’s say the ministry of education decides to cancel in-person classes for another year—I wouldn’t agree, but what would I do? I’d be stuck. It’s not like I can restart a school system alone. Opposite extreme scenario, what would I do if I’m forced to send Mark back to school and I don’t think it’s safe to do so?

What would I do—and mostly, what can I do—if borders remain closed for years, if another strict stay-home type of lockdown order is issued next week until a vaccine is found, is Stage 3 of reopening is scheduled for 2040, if the government puts citizens at risk (looking at you, USA…)?

Maybe the key to stay sane is to stop asking questions. 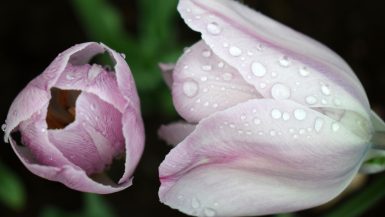 Raindrops and Vibrant Colours at the 2022 Canadian Tulip Festival