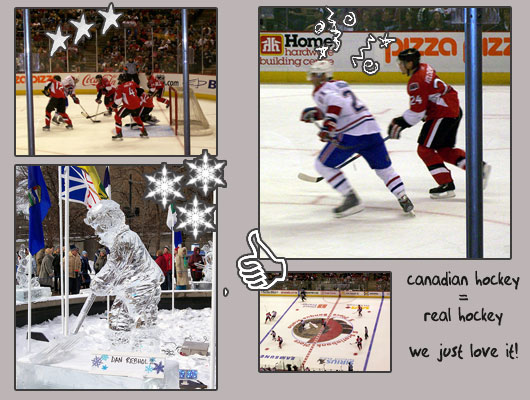 One of the reason we can stand the cold weather and long winters is… hockey, Canada’s national sport. Think soccer for Brazil, NFL football for the US or cricket for India. That popular. The hockey season ends with the Stanley Cup play-offs, then finals. I don’t have statistics, but I would bet that productivity at work dramatically decreases during that time!

Hockey is a really fun sport to watch. The game usually lasts 60 minutes (plus overtime if needed) and it’s a speedy game. A famous rivalry in Canada opposes Toronto’s Maple Leaf to basically the rest of the country. But Canada also love playing Russia, Sweden, Finland, and of course the USA.

Hockey is also famous for its fights, an established aspect of the sport. Elbowing, high-sticking, roughing are perfectly acceptable… and expected.

I’m not a sports person myself, but I must admit I like hockey. First, going to a game is really fun. The atmosphere is very friendly and fans of the two teams respect each other even if taunting is part of the game. Nothing like with soccer in Europe where fans are put meters apart with the anti-riots cops in-between. Second, even if you don’t understand all the rules and the lingo, you won’t be bored watching the players skate at a pretty amazing speed and hit each other (blood is bonus). A period is only twenty minutes long besides. Finally, Canadians take hockey seriously and being able to quote a great hockey moment (fight, scoring, penalty…) is the best way to make new friends!