After seeing full buses of gringos heading to Copacabana, Bolivia, I think it is safe to say the place changed quite a lot since we were there in 2002. New hotels, high-rise buildings by the lake, tour operators and casa de cambio everywhere confirmed my first impression. The world has discovered Lake Titicaca.

The scenery was beautiful. The huge lake, 3,800 meters above sea level. The clouds, so low, us, so high that we feel we can touch the sky. The burning hot sun during the day and the chilly nights. The local dish, trouts, huge fishes cooked with lemon and tomatoes.

But Copacabana also has a darker side. Money, money, money. Convenience stores import Pringles and US chocolates instead of selling local delicacies, and it has a price. No ATM, but each resident can change US dollars, Euro, Yen, at whatever rate they feel like setting — it´s not like we have the choice. Locals aren´t exactly friendly either: they take the money and run. Of course, this is Bolivia and everything is still pretty cheap for us. It´s mostly the attitude I dislike.

On our second day, we took a boat to Isla Del Sol, once of the islands of the lake. We left early in the morning and there was a beautiful deep blue sky, the lake was clear and the sun was hot. The boat was overpacked: we sat on the roof and enjoyed the ride.

There isn´t much in Isla Del Sol. Mostly a big climb to the top of the island for a better view of Lake Titicaca. But climbing at such a high altitude isn´t easy. I felt like I was 100 years old, out of breath every five minute, sweaty and light-headed. It took us over an hour to reach the top, but boy, the view!

We took the boat back with a bunch of Argentinian backpackers, who played guitare drinking mate de coca. The clouds behind us, heading to the shore as fast as the boat would allow it (packed, once again), passing floating villages and bare land.

Worth the altitude sickness. 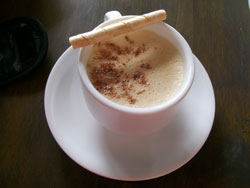 The Food Saga: The Drinks 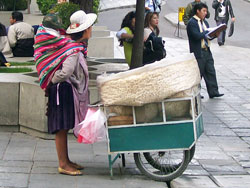 The Food Saga: The Sweets 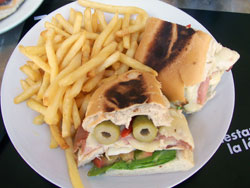