Finally, the Language Pack is Downloading!

It all started in the car. Eh, we are living in North America, after all.

Feng was driving, I was sitting in the passenger seat and Mark was at the back, in the car seat that he hates—well, he hates being trapped. So he was whining, and that’s fucking annoying. I did what any mother would do: I handed him a shrimp cracker. Okay, maybe not all mothers keep shrimp crackers in the car, but in our family, we do.

He grabbed it avidly with both hands, as if he hadn’t eaten in months.

“Merci!” I said, slightly annoyed by the whining.

Feng and I exchanged a look. “Did you say ‘merci’, Mark?”

During that short car trip, Mark ate way too many crackers just because I wanted him to say “merci” over and over again.

I mean, I knew he understood us in English or in French. If I say “Mark, can you please unplug my phone from the charger and put it in my bag?” he actually does it. What? Yes, I’m using my kid. Whatever.

But hearing him “speak” is way more fun.

I scraped my knee on gravels a few weeks ago. Yes, like a kid. I showed Mark my “injury”—really, a loonie-sized scrap on my right knee.

Against my better judgment, I handed him the alcohol-soaked cotton, and refrain from screaming “motherfucker, it burns!” (I do have standards, I only muttered it).

He completed the task and look at my knee again. “Mei?”

“No, Mark, the bobo is still here. It’s going to take time to heal.”

Ever since, he checks my knee several times a day for the “bobo”, blows on it and then check his own knees (in case scraped knees are contagious, I guess).

Mark and I also had our first verbal argument.

We were walking home and bikes were passing us on the pathway.

Mark repeated “bike.” Then suddenly he turned around, looked at me and said defiantly: “Vra.”

He looked disappointed. “Silly Mark! Of course it’s not a ‘vra’, it’s a bike!”

And we kept on arguing like this all the way home.

When Mark is not repeating words, he is attempting to sing. He gets frustrated because he can’t pronounce the words properly, so I have to finish the song for him. Too bad I really can’t sing.

Seriously, this is fun.

Now, of course, we are getting ready to confuse the hell out of Mark… I’ll explain in the next article! 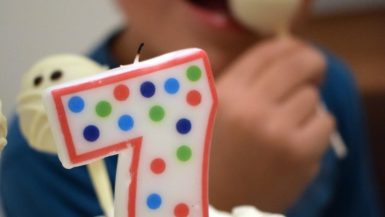