After passing out around 12 a.m., I woke up rested and, for once, I didn’t have to make sure I wouldn’t wake up other people in the dorm.

The first task of the day was to find a cheaper hotel. I visited a few and settled for La Casita, with a private room for $12. I moved and started exploring the city.

The idea was to grab breakfast but I quickly realized that Granada was not a morning city and at 10 a.m., the city was barely awaking. So I just explored the city, trying to get a sense of the various neighborhoods, and I stock up on some supplies at the supermarket.

I found lunch around 1 p.m. and then decided to take the boat to take a closer look at Las Isletas, the archipelago of 300-something islands scattered on the Lago de Nicaragua. From the lakefront I took a motorbike to the pier (don’t worry, I wasn’t driving the bike…), then hopped onto a boat.

The view on the Mombacho volcano was pretty amazing and so was boating on the lake. Suddenly, it was like stepping into another world, far away from the city.

We stopped at the “Monkey Island” and the boat captain suddenly turned the music on, Céline Dion at full volume. “It’s to make the monkeys come to us!” he explained, seeing my puzzled look. Guess what? It worked. Apparently monkeys like Céline Dion!

I’m loving Granada. It has everything… and more. 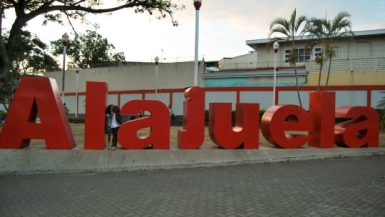