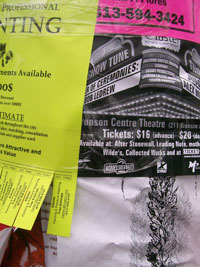 I occasionally miss not speaking English fluently. Trust me, life was a lot of fun when I could only understand half of what people were saying. My mind was working fast, perpetually trying to make sense of things. Could that be that?

I had a lot of misconceptions back then. I already mentioned a few times that I had stayed away from “beavertails” for a couple of years. I was picturing meat and furry pieces of the cute animal being served with maple syrup to a bunch of hungry Canadians, instead of just fried dough and maple syrup (or other sweet toppings). Well, how was I supposed to know? “Beavertails” sounds barbaric, doesn’t it?

I remember when I first started looking for jobs. Feng had bought the Saturday newspapers, and I was reading all the ads in the career section, circling with a red pen the ones that looked interesting. Suddenly, I saw “bookkeepers wanted“. The salary was awesome, the location very convenient and there were quite a few vacancy. Full of hope, I circled the ad and started to work on my resume in order to apply as soon as possible. I hadn’t finished yet when Feng came back from work and saw the ad I circled. He burst out laughing, saying bookkeeping was maybe not the best career choice for me. “Why not?” I asked, slightly hurt. “Well, for a start you hate math. And you probably need a bookkeeping certificate for that job anyway, which you don’t have“.

I was totally puzzled. What had maths to do with bookkeeping? Wasn’t the job about keeping books, like a bookseller? I loved reading, I loved books, and I had already pictures myself sitting in a big room full of bestsellers, keeping an eye on them at all time, since I would be an official book keeper. What could seriously go wrong with that?

Turned out that a bookkeeper was like an accountant. Hence the joke about my maths skills. Oh well… how was I supposed to know?

But then, I was very easily confused in my first few years in Canada, lost in a French-English (franglais) world. At the restaurants, with “entrées“, for instance. In French, an “entrée” is a starter, not the main course. I learned that after being served steak and fries as an “entrée“, and trying to mentally figure out how was I supposed to eat the main course after that. Luckily, that was my main course.

In all the fast foods, I had also noticed a weird sign: “no loitering“. “Who does that?“, I thought. “I mean, there are huge garbage bins everywhere, doesn’t everybody throw away any waste left away after eating?“. Turned out the sign wasn’t about “littering“, as I had read, but about “loitering“. Since I had never seen that word before, my mind somehow linked this unknown word with another one I knew. It took me many many visits to the local food court before I actually remembered to check “loitering” in a dictionary. And I still found the sign strange, since loitering is not a crime nor an offense in France (good thing I guess, since I spend half of my high school time “loitering” for hours in cafés with my friends).

At least, I was lucky, I thought. French and English have a lot of words in common. Plus, French do use a lot of English words.

Except this didn’t work either. The first time I stopped an innocent soul in the street to ask directions to the nearest “pressing“, he was totally clueless. How was I supposed to know it wasn’t real English, but French English for “dry-cleaner“? I was confused. “Camping-cars” turned out to be “recreational vehicles“, a “smoking” was a “tuxedo“, “drive-ins” were “drive-through“, “baskets” were “sneakers” or “running shoes“… even “shampooing” was “shampoo“!

And I had thought, like millions of French, that I was speaking English…!

Even though not speaking English fluently was frustrating at times, a lot of things I didn’t understand were left to my imagination, and I love the way my brain worked faster to interpret my surroundings correctly (or not). Same as when we were in Brazil, this winter, and I had to adapt to Portuguese.

Now don’t get me wrong: I’m glad I finally speak and write good English. Yet, franglais was fun too…