One, Two, Three, What Are We Fighting For ? 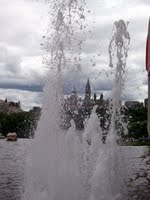 When was the last time you truly believed in something ?
French never really realized they don’t own half of the world anymore and we had a point of view on everything. We grew up believing in the European Union but we distrusted anything behind the former iron curtain. Italians, Spanish and Portuguese were our new neighbors and we flooded their beaches in the summer – but our grand-parents still remembered a time when they were masons, at the bottom of the society.

Algerians, Moroccans and Tunisians all spoke perfect Parisian French but they were new immigrants, an easy target for the obnoxious Front National. Once an oddity in the French political scene, the radical right-wing national-populist party was growing. Meanwhile, Mitterrand was retiring and the right-wing was coming back into power. Germans were France’s friends again and Bill Clinton was strangely close to French culture with the Lewinsky scandal.
Social crisis. Protests. Demonstrations. Riots. The me-generation made a lot of money but they didn’t pass it on. The years of easy money… didn’t see the colour of it.

We had a strong social conscience. Why wouldn’t we ? Our parents started to lose their jobs, teachers were on strike more often than the railroaders and we were painting placards and working on slogans every September and October when the government would attempt the reform the school system… again. We marched the streets, we argue with the cops, we scraped with the young fascists who handed out their shitty propaganda in front of the high school, we met at night in an old attic to set the world to rights. We were young when we picked a side. Right versus left. French-style Manichaeism.

That’s how I left. That’s how I arrived in Canada. A bit brainwashed, fairly innocent and very Socialist and one hundred percent sure this world needed change.

Canadian politics. Two main parties : the Liberals and the Conservative. So, the Liberals must be right-wing – cause in France, being called a Liberal is a bad word, much like being called a Socialist in Texas. Oh, they’re fairly left-wing ? Alright. But what about the Conservative ? What a stupid nickname ! Oh… not a nickname ? Mmmm… Why would anyone name a party “conservative” ? What’s to brag about in being conservative ???

So, when is the demonstration season ? In France, we have two : May-June (nice weather) and September-November (Parliament back in session). How about here ? No, I don’t wanna know about the hockey/ curling/ football/ baseball season ! I’m talking about p-o-l-i-t-i-c-s !

Oh what’s the hell, they don’t understand anything.

Okay. Do you guys have irrevocable benefits ? We can fight for these if you like. Remember when the French government tried to suppress the Pentecost holiday to fund a social program ? Oh yeah, that demonstration was fun ! Do you want to defend public services ? You know, civil servants and the people, walking together side by side to demand that state-owned services keep low profit and maximize services. It’s beautiful, really. Besides, the state can’t really have train, urban transit, mail and hospital on strike forever, so we usually get pretty good results with these. I mean, even if you don’t have a precise complaint, it’s alright. We usually go on strike first and then negotiate.

NHL lockout ? What NHL lockout ?? Hockey players have a union ??? But what about the people ? That’s not exactly what I meant when I said I needed to know more about Canadian labor dispute !

You do elect a President, right ? Prime Minister, whatever. Okay. So you must be disappointed if your party doesn’t win. Here we go ! Start a strike cause the PM didn’t get you what he promised. I’ll show you.

Or not. After a few months, I realized Canada was a pretty peaceful place. Sure, there’s the language battle, the softwood lumber conflict with the USA, land disputes with the first nations but people are less into politics and tend to mind their own business. It’s not that Canadians don’t fight. But they’re paid to do it – it’s called WWE or hockey night in Canada.

In France, social identity is based on being a member of a group. In North America, social identity is based on the individual. In Europe, people believe in – and value – revolutions. North America believe in slow but steady change. When people have a problem, they tend to turn to local authorities : the mayor, the city councilman, the newspapers, the medias… You just don’t protest for the sake of it. You actually try to find a suitable compromise between two parts. Oh, that’s good news.

Now if you don’t mind, I’m gonna take my red flag down to the basement.