People of Santiago and Their Occasionally Weird Activities

“See you in… twenty minutes?”

I was just going to buy fresh, out-of-the-oven marraqueta bread around 10 a.m., the missing item for dinner. Easy task, short 850-metre walk: Monjitas all the way to Plaza de Armas, then down Catedral to the Minimarket.

But despite the green light, I couldn’t cross San Antonio—hundreds of cyclists coming from nowhere, or more plausibly from the market area, were blocking the traffic, speeding by the growing number of pedestrians waiting, a puzzled or annoyed look on their faces. Five minutes passed, then six, seven…  Gosh, how many were they? This had to be an event or an organized ride, not just Santiaguinos going places. Cycling is popular here—I noticed bikes parked on balconies—, but still. Were they making a statement? Protesting? Just having fun? I’ll never know. I can only tell you it wasn’t the “Naked Bike Ride,” they all had clothes on.

Just another activity of the people of Santiago I don’t fully understand.

I’m an observer and an outsider. Occasionally, I stumble upon weird and entertaining groups of humans.

Like the teens at the Parque San Borja last Sunday. I was walking by when I noticed people sitting on the grass, selling stuff. I entered the park, expecting one of these Sunday street markets—anywhere, anytime in Santiago, there’s someone standing behind a sheet on which goods, ranging from clothes to nail clippers, from cactus to magnets, are displayed.

The vendors were younger than expected—late teens or early twenties. The precious goods? Japanese “kawaii” stickers, pencil cases, keychains, etc. A few metres further, life-size cardboard cutouts of two Asian pop stars were tied to a palm tree. And then, further down, the park was packed with Chileans dressed like Japanese or Korean teens and practising dance routines.

I googled it later—apparently, this is the meeting place for K-Pop lovers, a growing trend in Chile. 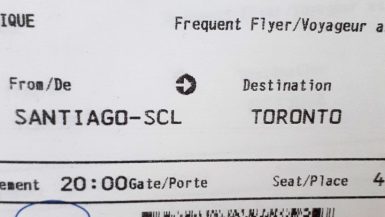