Stephanie, a “Frozen African” in Canada

Meet our “frozen African”, a new permanent resident in Russell, Ontario! She was born and raised in Ivory Coast, then spend 13 years in the US. This is where she met G., the Canadian prince charming.

She decided to move to Canada and applied for permanent resident through the sponsorship program. Sixteen months later, she settled in Canada… pregnant!

She blogs about her pregnancy and her new life and Canada on The Frozen African. You can also follow her on Instagram.

For love! I know, such a cheesy answer…

I met my husband in Baltimore, MD, in October 2011 while he was on a two-year work assignment. We dated for 6 months. We knew we were made for each other after discussing our short- and long-term goals. Eventually, I decided to move to Canada when his assignment was up.

He proposed on Cinco de Mayo, and we planned to move in together a few weeks later, but he got called back to Ottawa early. We were devastated (translation: I was crying my eyes out!). We had to cancel our deposits for our wedding that we had planned for February 2013).

Instead, we started gathering paperwork for the family sponsorship process, got married in July 2012, and eventually sent our big bulky application to Mississauga in October 2012.

I think the immigration process was pretty straightforward—it’s just that we are asked so many personal questions (basically, you have to disclose your whole life story). We had to make sure we did not make any mistakes while filling out the application. We did hire an immigration lawyer because we were a bit paranoid and wanted everything to be perfect.

We applied under the family sponsorship category (my processing office was Dakar, Senegal as I am still an Ivorian citizen even though I lived in the US for 13 years). The whole process (from sending the application to receiving my permanent residency status) took 16 months.

I believe we were lucky (and blessed) because when we applied, this visa office had an average processing time of 25 months! The wait was pretty tough and challenging, but totally worth it now that we live together in the same house.

Actually pretty excited/scared/nervous! I am happy that my husband and I are finally together physically while going through this pregnancy (we found out we were pregnant when I was still in the US and we hadn’t heard yet regarding my PR). We decided to have a home birth so this is a new adventure for us. Being new to the Canadian healthcare system, I am eager to see how it plays out as I am close to giving birth in September. The whole pregnant/motherhood thing is pretty new to me and my husband swears that parenting in Canada is different (i.e. education, health, etc…) from the US.

I learned English when I was in kindergarten in Ivory Coast and continued all the way to elementary school. Then, I moved to Baltimore, due to civil unrest, and I had to “re-learn” English because, when I was talking to my classmates, I used “British” English rather than American English. There is nothing like people laughing at you in class when you use “rubber” in a sentence (in the UK, it’s an “eraser”, not a “condom”!)

One, Canadian tends to be friendlier, but a bit reserved at times when it comes to friendships. It is frustrating when trying to make new friends, but I decided to take it day by day.

Second, food quality seems to be better in Canada. For example, for years I believed that I was lactose intolerant while living in the US so I avoided cow milk like the plague and stuck to soy or almond milk. Since coming to Ottawa, I realized cow milk here tastes better and I have no reaction to it. Heck! Nutella made in Canada tastes better than the one made in the US and this is coming from a Nutella addict! I know it seems silly to talk about food, but it really made me question to quality of the food I have been ingesting when I was in the US, and how unhealthy it was.

Being able to speak and read in French a lot more than when I was in the US (i.e. at work, seeing roads signs, etc…)

Living in the same house with my husband. I know it sounds cheesy, but after being separated for so long, it feels so good. Also, parts of Ottawa reminds me Baltimore and Washington D.C. which somewhat brings a comforting feeling.

10)      What advice would you give to someone starting the immigration process? 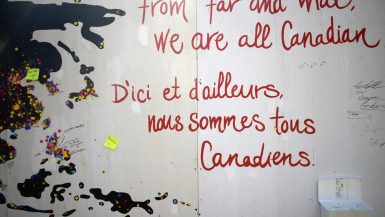