Granted, when it comes to dangerous and weird animals, Australia is probably number one (I will never forget driving at dusk in Alice Spring… bloody kangaroos!). But Canada, with its huge land mass and small population density, also has a great wildlife. 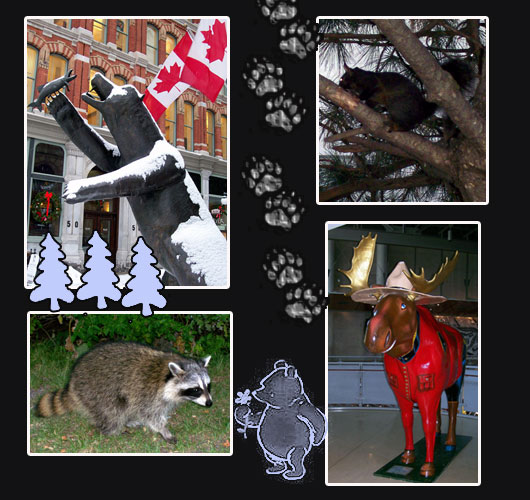 Granted, I don’t get to see bears everyday, which is all in all probably a good thing. I mean, it’s not like they look like Winnie The Pooh — or so I’ve been told.

However, despite living in Ottawa’s close suburb, I get to see a bunch of animals on a daily basis. Rabbits run around the house and scare me when I go out for my last smoke at night. Squirrels are cute animals but they drive us nuts (no pun intended) in the summer, when they dig in potted plant and cause power outage by chewing on power lines (seriously). Raccoons are cute but also clever and persistent, and in residential and urban areas they can be considered as pest. They can open garbage cans with their hands and feast before the garbage truck even has a chance to come… Finally, skunks are best known for their strong odor secreted if frightened or disturbed. We usually don’t get too close to them in case of… but they don’t mind getting close to us!

Quite a few animals became Canadian symbols. The beaver, for example, which is on the 5¢ coin. Lots of places also bear the name of an animal: the cities “Moose jaw“, “Whitehorse” or “Goose Lake” for example. And generally speaking, Canadian are quite proud of their wilderness and fauna. A true animal kingdom, I’m telling ya!