Welcome to my “Central and South America Food Saga“!

Food was very good and plentiful in Argentina, Uruguay and Brazil. We both loved it… we feasted!

The first Argentinian city we went to was Ushuaia, in Tierra Del Fuego. Because of its geographical location — it is the Southernmost city in the world, stuck at the tip of the Americas, right in front of Antarctica — food was quite expensive. We ended up cooking in hostels a lot throughout all Patagonia for the same reason. But once back to civilization, in Buenos Aires, we truly got to enjoy the gastronomy.

Argentinians are big meat-eaters. Meats is cheap, by world standards, and is delicious. Parillas (steakhouses) are plentiful along Florida and Lavalle streets in the capital, as well as in most popular downtown areas, such as San Telmo. Even cheaper options are the ubiquitous buffets, with all-you-can-eat options at around $6 to $8 per person including a drink. Typical buffet food include rice, beans, eggs, mashed potatoes, lots of meat and few veggies. A lot of these restaurants are Chinese-owned, so you can also sample various stir-fried dishes.

Italian food is also very popular, especially in historical districts such as La Boca. But most restaurants offer at least one type of pasta, and pizzas. The only thing I got sick of after a while was the lack of “healthy” options. As I said, few dishes include vegetables (a couple of tomatoes in the pizza does NOT count) and I can’t survive on just meat!

Uruguay had similar food. Lots of meat, some good Italian food, and a bit of Chinese. I liked the popular lunch sandwiches, such as the “completo” and the “Canadiense“, mix of ham, olives, red pepper etc. on wheat bread. Argentina and Uruguay also seem to love super panchos, aka hot dogs. I even saw a all-you-can-eat hot dog place… Yep. Never had a hot dog in my life (the two on the picture are Feng’s), don’t plan to start anytime soon.

Food in Brazil was a bit more exotic, but it may also be because we don’t speak Portuguese. In the South, we were still in gaucho country (cowboy of the pampa), so there was quite a lot of meat and churrasco (Brazilian parilla). In the Southeast, typical dishes included feijoada (a black bean and meat stew), feijão com arroz (rice and beans), stew vegetables (yes, finally!). Most dishes were pretty basic but tasty. I loved the tutu de feijão (a paste of beans and manioc flour) which is used to spice up the rice, and the pão de queijo (a cheese and manioc flour roll).

Brazilians like the “comida por kilo” style restaurant: basically a huge buffet, with food priced at about $1 per 100 gr. Your plate is weighted after you make your selection. I liked that way because we didn’t need to decipher menus in Portuguese, plus I think people waste less food than in a regular buffet. 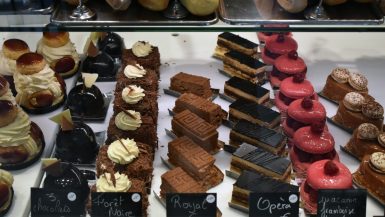