When I’ll take the oath of citizenship, I’ll have to swear that “I will be faithful and bear true allegiance to Her Majesty Queen Elizabeth the Second“. Yes… even though Canada is a sovereign country, it is a constitutional monarchy with Elizabeth II, Queen of Canada, as head of state, and a parliamentary democracy with a federal system. Sounds complicated, doesn’t it? 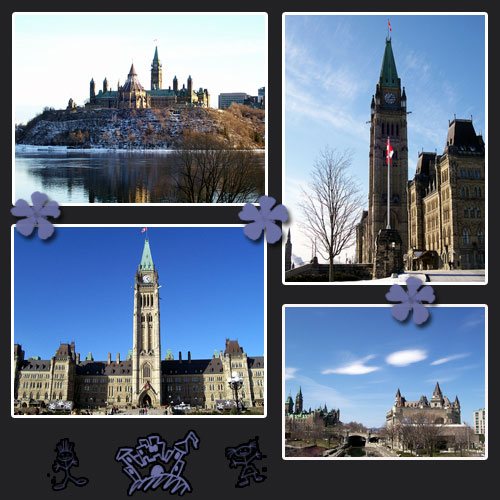 Elizabeth II is the sovereign and head of state of Canada, and holds the executive, judicial and legislative powers. In practice, the monarch appoints a Governor General to represent her. Michaëlle Jean is the current Governor General.

Canada is a very decentralized federation: each province has a lieutenant-governor, a premier and a legislature.

Canada’s two main political parties are the Liberal Party, and the Conservative Party. Other major parties include the Bloc Québécois and the New Democratic Party (NDP).

We also have a few smallest (and funniest) parties, such as:

Business and private sector thrive in Toronto, but Ottawa is all about politics. The federal capital is indeed home the the nation’s Parliament and most of the federal ministries. It sometimes seems that everyone here is working for the government, directly or indirectly. Nowhere else in the country you will find people arguing at Starbucks about the latest cabinet reshuffle at Fisheries and Ocean or the appointment of a new policy analyst at Canadian Border Services Agency. Also known as CBSA. Because we all talk in acronyms here. Goes with the job!

And the last post close my Canadian-ism(s) series. Next week, I’ll start a 10 posts series on blogging. You’ll learn about WordPress and Blogger, plugins, how to set up a self-hosted blog, making money online and much more! I’ll publish it every Saturday — enjoy!