After the weather, hockey and the use of both French and English, here is another episode in this “what defines Canada” quest. 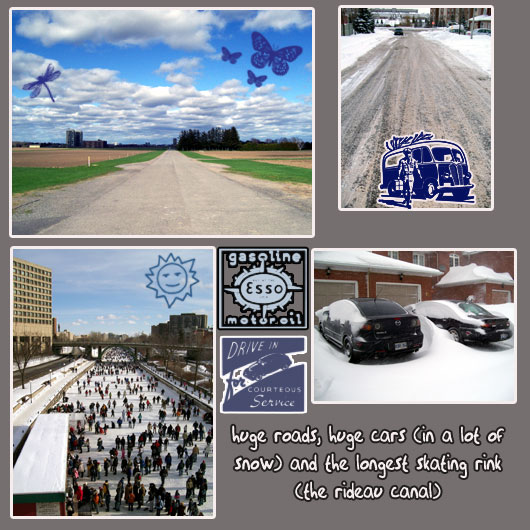 Unless you’re from Russia or China, you will probably feel that Canada is a pretty big place. And you would be right: Canada occupies a large portion of North America and even if “the North” is very sparsely populated with only about 100,000 people (3/4 of us actually lives within 150 kilometers of the US border), we are hard to miss since the country covers 9,984,670 km². And if you’re from Russia, please let’s not argue about the Northwest Passage — it’s not like we can navigate it yet, okay?

A huge country with a relatively small population (a little bit under 32 million), the density is among the lowest in the world. The population is spread across ten provinces and three territories. Ad Mari Usque Ad Mare; from Sea to Sea is our motto… From the Maritimes to British Columbia, across the prairies and the mountains, there’s a lot of space… and a lot of roads to link us all.

As in the USA, Canada boasts a strong car culture. Truth is, unless you live in Montreal, Toronto or Vancouver, you will need a car to get around. I still remember back in France, where driving 60 kilometers to the seaside was considered as a relatively long trip… I live in a very close suburb, still a good 15 km from work. And I’m not even talking about people living in Ottawa’s furthest suburbs, like Kanata, 25-30 km away. Going to work, to the supermarket, to the movie theater isn’t really a matter of walking a couple of blocks. Drive, drive, drive.

Roads and streets are wide, and crossing them as a pedestrian can be quite scary the first time. French roads are usually one lane, and streets are old, narrow, winding and somewhat have a neighborhood feel. In Canada, streets and roads alike are built for cars not for people. Drives (no pun intended) me nuts sometimes.

For the huge roads, huge cars. SUV, 4×4, brand new from the GM factory and ready to eat asphalt. I sometimes quite don’t get why people keep on buying expensive cars here, since roads are quite bumpy (bye bye suspension!) and the steel frames get damaged very easily with the salt we spread on roads in winter. Yet, most suburban households have a two lanes driveway and make full use of their two or three cars.

Living in a big country has its advantages. Sure, we might spend more on gas driving around all the time (and I wish we didn’t), but it’s relatively easy to find a place to leave since the occupation rate isn’t 100%, unlike in France right now. Buying a house is usually affordable as well in most suburbs — it gets trickier in TO, Montreal and Vancouver of course. We can also enjoy downtown parks (and even a government-owned farm in Ottawa!), the longest skating rink in the world (7.8 km!), a variety of cultures and the great geographical diversity throughout Canada.

Yet… everything looks so small that when I visit Europe now, I feel like I’m in Lilliput!