The Land Of Plenty 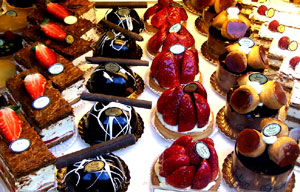 One thing I never fail to notice every time I visit France, is that we really eat like pigs in North America.

Now, don’t get me wrong. I’m not one of these woman who count calories and feast on lettuce — quite the opposite. But I had always prided myself on being healthy, with curves and yes, a butt. I believe we are all shaped differently and the numbers of the scale don’t tell half of the story. For me, food has always been a pleasure and I eat without guilt. But I came to realize that it just wasn’t that easy in Canada. In France, I didn’t have to think about what I ate. Here, I do.

First of all, food is everywhere here. Obnoxious commercials on TV invite you to eat at the local restaurant, to taste the latest burger, to buy pre-prepared meals “that taste homemade”. Turn the TV off and there are McDonalds, Harvey’s, Burger King, Wendy, Tim Hortons, Pizza Pizza on every street corner, and they soon become the easy lunch choice. Or, if you’re health conscious, you will just find yourself queuing at the hot-dog stall in the summer, because at least, “it is prepared in front of you” (on the sidewalk, but nevermind). People feel the need to eat in places they shouldn’t even think of: at concerts, sports games, outdoor activities, movie theaters; on the bus, the train, in their cars. I clearly remember a time where I would go to the movie and would at most had a bottle of water in my bag. Why do people in Canada pay $10 for their movie ticket and $12 for popcorn and a drink remains a mystery to me. And it’s not only the popcorn… I can often spot (and smell!) people eating burgers, sandwiches, nachos, or even fried chicken!

Then food isn’t always just food… to be precise, it’s often more fat than food. As I said before, I have never counted calories but I do know that we need a bit over 2000 calories/ day. Now, take a sample KFC menu (possibly the grossest fast food chain, granted): a chicken sandwich (500 calories), a medium fries (450 calories), some ketchup (15 calories) and a Pepsi (300 calories) and here are 1200 calories. Ooops. I’m not even gonna mention how much fat is that… And the menu I always see advertised, the bucket with two wings and three legs, is 800 calories – that is just the meat. Meanwhile, in supermarkets, while it is of course possible to find fruits, meat and veggies easily, the number of aisles dedicated to processed food always amazes me. I don’t cook every meal and love to go to restaurants every once in a while, but I draw the line at eating pogos (apparently known as “corn dog” outside Canada) or other pre-preapared food for lunch or dinner on a regular basis.

To me, portions are the biggest problem. Here, if you want to keep an healthy weight, you can not just eat what is given to you — it’s way too much in most cases. It reminds me of one of my first experience with North American menu sizes… We were on the road to Mexico a few years ago, crossing the USA by Greyhound bus. In the middle of the third night, the driver stopped at a McDonalds, in Dallas (TX). We got off the bus and went to get some food. I ordered first and Feng was after me. I just wanted a simple combo, burger/ fries/ drink. A couple of minutes later, Feng and I stared in disbelief: there were enough fries for a family of four, the burger was so big it could barely fit in its paper box and the Coke… I had at least a liter of Coke in front of me. I had never seen such a big drink size. Feng decided to not order and even the two of us couldn’t finish the meal.

Now, imagine being fed that everyday… You would probably get used to it even though his is way too much food for one person. While in France you may pay a lot for a tiny portion of food, here you pay almost nothing for a huge plate. Buffet-style restaurants for example. In North America, they are mostly popular because people think they are getting a good deal: eat a lot of food (basically as much as you can) and pay a small price (from $10.00 to $25.00). As a French, when I first came, I just couldn’t understand that. First of all, I felt like I was eating at a school refectory: gotta grab your own plate, line up for a slice of roast beef, add fried potatoes/ fried chicken/ friend shrimp and hope for a good dessert. I would be full right away and wondered why people would pill up food in their plate instead of taking just a bit at the time and go get some more when needed. I was told the point was to eat. But my point is to eat good food, not stuff myself with cheap fried stuffs.

To strike a happy medium is sometimes difficult. A lot of people eat junk food and then just head to the gym, as if running for two hours was gonna to cure the sin of eating. Between us, I’m way to busy lazy to go to the gym. I like the way I lived my life in France: I ate normally (i.e moderately) and walked everywhere as a form of exercise. But walking here isn’t that easy. Harsh winters, urban planning that favors driving and long distances makes it much harder than in France, and in Europe in general.

Now, I’m not saying that Americans are all unhealthy and all foods here are bad, while French or Europeans are perfect and have the best culinary taste. There are plenty of delicacies here and I just love sampling the dishes. But I do think a lot of North Americans have a very unhealthy relationship with food. From eating the wrong foods too often to banning some food groups altogether as a way to diet, from binge eating and exercising to exorcise heavy meals to eating too much too often — this can’t possibly be healthy, physically and mentally… isn’t it?