The Wonder That Didn’t “Wow”

When you are in Yucatán, you have to stop at Chichén Itzá, the most famous Mayan archeological site. It’s emblematic pyramid, El Castillo, is pictured everywhere, from souvenirs to the state’s licence plates, and it has recently been named one of the new Seven Wonders of the World.

We’ve been to Chichén Itzá three times already and I confessed to Feng that this time, I wasn’t so excited about visiting. Been there, done that. I mean, the pyramids probably didn’t change, right?

Yet it was on our way, so we stopped. We had to.

The problem with Chichén Itzá is that it is a very touristic place, and it had gotten busier since the “2012 end of the world” phenomenon and its new Seven Wonders of the World status.

We started in Piste, the village by Chichén Itzá. It was much less developed and busy than I had expected and our lunch was a simple and cheap place of chicken, rice, beans and tortilla (and pasta for Mark, spoiled by the cook!). I was actually surprised Piste wasn’t more touristic but I guess the tour buses just stop right at the entrance of the ruins, where there is a restaurant and many souvenir shops. Too bad the village doesn’t seem to get its share of tourism dineros.

At the site, three kilometres from Piste, we were greeted by a dozen of tour buses and a long lineup to buy tickets at the entrance.

Chichén Itzá is fairly compact and El Castillo is right at the entrance. There, many groups of tourists and their guides were clapping their hands, testing the echo. Back in 2001, when we first visited, you could actually climb the pyramid but it is no longer allowed. And, as we discovered, the structures are actually protected by a fence now, so you can’t even get close.

We walked around the site but, much to our dismay, most ruins were behind a fence and you had to follow the one and only path around, bordered by annoying souvenirs stands—”cheap, one dollar, one dollar!”

I mean, I know sellers are here to make a living but I am here to see the ruins, not to buy a “Chichén Itzá—Hard Rock Café” souvenir t-shirt! (No, there isn’t any Hard Rock Café here… yet.)

Feng and I mourned the “good old days” where they weren’t as many tourists and when you could explore the site more freely. I mean, on one side I understand that the site has to be protected from the impact of mass tourism, but it’s just not the same when you can’t even walk around the structures.

At the end, I gave up on taking pictures and handed my camera to Mark, who had a blast taking shots. Yep, a fifteen-month-old photographer!

We left early afternoon and drove to Valladolid, where we decided to stay overnight. 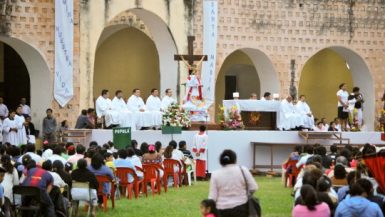