24 Hours in Puerto Iguazú – No Doubt, We’re in Argentina

Despite being right next door to each other, the two neighbours couldn’t be more different. Foz do Iguaçu and Puerto Iguazú aren’t two border towns that blends seamlessly—they exemplify both cultures.

On the Brazilian side, the long and wide streets are parallel and perpendicular to each other. On the Argentinian side, don’t bother with a map, just ask around for directions. “Behind the water tower” and “more or less two blocks from the bus terminal” will be more helpful to navigate the town. Brazilians are done eating when Argentinians are setting tables in restaurants around town—of course, the bakery closes at midnight, why are you even asking? While Brazilians grab fried salgados at the lanche or fill their plate with tropical fruits and meat in a comida por kilo buffet, Argentinians hesitate between the three Ps—pizza, pasta or parrilla. Same love for football, different stars and opposite allegiances. Beer and açaí juice on one side, wine and mate on the other.

Brazil and Argentina, two friends who play in the same room but don’t really understand each other. Their respective cultures don’t leak across the border, with the exception of the pão de queijo that made its way into Puerto Iguazú’s bakeries—I suspect Argentinians were just too happy to add a cheesy bite to their diet consisting mostly of cheesy things.

We took a taxi from Foz do Iguaçu and the Brazilian driver got nervous meters after crossing the border. He asked for directions in broken Spanish and eventually, I’m the one who spotted the street.

Our hotel in Foz do Iguaçu was your usual clean and functional if sterile room with a decent shower, free breakfast—Brazilians love breakfast—and fast Wi-Fi. On the other side, Argentina mostly offers friendly and overpriced artsy posadas where absolutely nothing works as supposed to. Most hotels we stayed in have one forgivable flaw—low water pressure, slow Internet, no chairs, soggy mattresses, etc. But this one committed a cardinal sin—there was no water, oops, issue with the water tank. I pointed out how ironic it was, considering the posada was hidden right behind the town’s water tower and located twenty kilometres from the world’s largest waterfalls.

Feng defined it best—Puerto Iguazú is a bit “jungle-ish,” which is a euphemism for “don’t expect much from a town that makes money from tourists who usually stay two days at most.” Foz do Iguaçu is mostly a normal Brazilian town which happens to be close to the Iguazu Falls. Puerto Iguazú lives for tourism and doesn’t have much to offer other than being a base to explore the national park. Waste is burned in the street in the evening, supermarket fridges are warm, garbage cans are overflowing, the police randomly stops drivers, everything is overpriced because hey, you’re kind of stuck here, right?

It’s the wild west and Argentinians don’t seem too happy with their economy, once again. The word “inflation” is often mentioned…

We spent the evening walking around the town and hiking to the Marco de las Tres Fronteras, easier to reach in Argentina than in Brazil. Then we played the “is it going to pour?” game—it didn’t—and we spent a short night getting eaten alive by mosquitoes in the posada (don’t ask, the roof had holes, of course…).

I should have slept earlier. We have a long day ahead tomorrow. 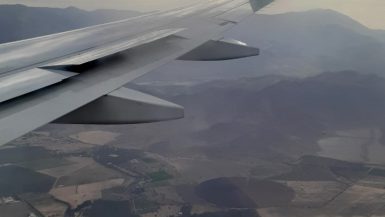