We hesitated until the last minute—where and how should we celebrate New Year’s Eve 2021?

Florianópolis had cancelled the traditional fireworks at the Hercílio Luz Bridge. I asked around—locals were planning to party at the beach, any beach.

Florianópolis was a ghost town on December 31. It was hot, humid and a bit rainy, and we had the city to ourselves, so we crossed the bridge back and forth and walked along the shore. Then the sun came out and it was lovely, probably no rain overnight, yay!

We brainstormed plans for the evening while making dinner. Balneário Camboriú, a popular beach town nearby, was still going ahead with the fireworks show, but a million people were expected and we were afraid to be stuck in a massive traffic jam.

We usually hate Canasvieiras because it’s always noisy and crowded—an entertaining people-watching experience every time, but there are much better beaches around the island if you actually want to swim and relax.

Good pick for New Year’s Eve, though. We arrived around 10:30 p.m. and streets were already packed. The beach was too, but it didn’t feel claustrophobic and I was super excited because I had always wanted to spend New Year’s Eve at the beach.

We bought a white rose, to be tossed into the ocean for good luck. We gave Mark the firecrackers we had brought from São Paulo—travelling with a Chinese husband means travelling with fireworks, there’s always something to celebrate… Then we joined the fun and other white-clad revellers on the sand. Most Brazilians had come prepared with champagne, glasses, food, balloons and more.

At midnight, we got fifteen minutes of unofficial (or “officially cancelled”?) fireworks on both sides of the beach, then the party started—music, booze, pot, food, firecrackers, kisses, a dip into the ocean, whatever makes you happy and cheery.

Yes, Mark, really, you slept at 3 a.m. Told you, questionable parenting is our trademark, ah, ah. 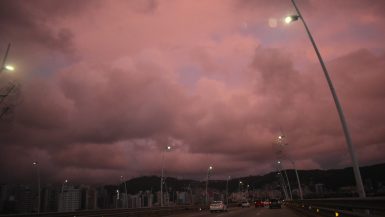 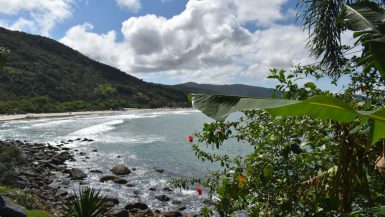 Revenge on Water and Goodbyes to Santa Catarina Island 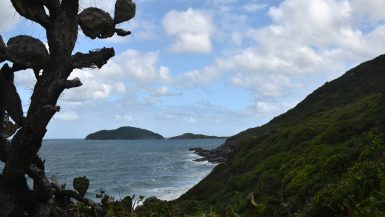 Perfect Waves and Jungle Trail at Praia Do Santinho