The First Trimester and the Baby Bump in France

On my 29th birthday, the baby bump and I flew to France. Actually, I didn’t have much of a baby bump—I thought I could see one but that was probably my imagination. I was only seven or eight weeks pregnant. I actually had to Google how many weeks was a full-term pregnancy, that’s how little I knew about it. The answer? About 40. Forty weeks. And I was only 1/5 of the way.

I remember looking out the plane window, staring at the sunrise over Europe, and being scared of the long road ahead of us.

Every morning, I had to remind myself I was pregnant. My “condition” was invisible to the world. I wasn’t “showing”, like pregnant women like to say. I wasn’t even sick anymore: the nausea had vanished mysteriously a few days after taking the pregnancy test, as if it had only been there to inform me a mini-us was growing inside my belly. I was still more tired than usual but few people could notice. To the outside world, I was… just me. But when I looked at my reflection in the mirror, I thought I looked different. I certainly felt different. I was carrying a huge responsibility that weighted only a few grams.

Being pregnant comes with a hearty congratulations and a phonebook-thick list of warnings, recommendations and advice.

I was still in the first trimester, and the risks of miscarriage were high. I tried to not worry about that too much because really, I had no control over it. I was keeping my fingers crossed but I had decided to travel to France anyway. I had to be by my mother’s side.

I like to be informed, so before going to France, I tried to learn as much as I could about pregnancy.

I bitterly regretted it.

I hadn’t had another appointment with the doctor (and no one from the clinic had called to say my panties had been found—thanks God!), and I wasn’t feeling close to her anyway since I had only met her twice. So I did most of my research online.

I already knew that looking for medical information or advice online was not a good idea, especially if you were slightly hypochondriac. I mean, Google “headache remedies” and chances are it will link to “brain tumour”.

I should have known better than to Google “pregnancy”.

I found most websites were incredibly negative. Past the first sentence that invariably started with “congratulations!”, they listed a long list of potential problems and risks, current or to come.

As I soon discovered, in the name of the precautionary principle, everything came with a caveat. The most innocuous habits could suddenly be a problem. Taking hot a bath or a hot shower? Could be dangerous. Wearing nail polish? Could be toxic. Taking over-the-counter medicine? Better avoid it. Don’t eat fish, cheese, deli meat or anything raw; don’t drink caffeine or tap water (!), stay away from microwaves, pesticides, pets; don’t dye your hair; don’t get stressed or tired; eat a lot but don’t gain too much weight; don’t sleep on your back; don’t travel in the first or last semester; don’t do this, don’t do that…

The list of “things to avoid when pregnant” seemed endless, and the French hedonist in me rebelled. I have a life. I had a life. And nine months is a long time to abstain from pretty much everything “just in case”, especially considering that some of so-called recommendations seemed to be coming from tin foil hat wearing folks.

Call me selfish, I don’t care. I love when women on forums get on their high horse and blame other “irresponsible women” for the choice they make. “It’s your BABY! It’s ONLY nine months in your LIFE!”

Well, if you can be a perfect pregnant woman, good for you. I can’t and I won’t. I will do my best and live with it.

Being mindful of the bean-shaped baby and generally aware of my “condition” was common sense. But at the same time, I didn’t want to become paranoid. Being pregnant is not a disease. I trusted my body to do its best. And I wasn’t going to be sheltered for nine months in the name of the precautionary principle.

I also found Internet advice about pregnancy incredibly negative. Some websites made it sound like a slow road to hell paved with bloating, constipation, nausea, stretch marks, sleepless nights and a general degradation of your body and mind. Gee, thanks. Can we focus on the positive side for a second?

So that was my mindset on my way to France. I was confused and scared but I couldn’t afford to be. I had to be strong… somehow. 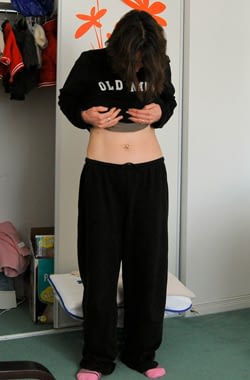 Pregnancy and Travel – Yes You Can!

10 Things That Feel Great When You Are No Longer Pregnant