“This is AWESOME. I love this place! Frankenstein, haunted house… there’s a Pizza Pizza too!”

“Believe it or not, you’ll also find one of the world’s most famous waterfalls just down the street.”

When you think about it, the city of Niagara Falls was designed with seven-year-old kids (or stoned adults) in mind.

Let me start by pointing out two things you wouldn’t suspect if you’ve only seen Niagara Falls from the comfort of your office chair. First, the city—or at least the tourist area—is much smaller than you’d probably expect. Second, it’s also much tackier than you’d imagine, unless you live in Vegas, in which case it must feel like home.

On July 4, we left Toronto and drove the 130 kilometres south to Niagara Falls. This was the only side trip we could take. Right now, crossing the US border is at the bottom of my to-do list after “spending a winter in Nunavut.” Not that venturing into New York State is an option anyway—the land border has been closed to nonessential travel since March.

This is one of the COVID-19 hot topics around here and “border” is always referred to in the singular, as if the only closed border worth mentioning was the world’s longest undefended international border shared between the United States and Canada. On Canada’s side, the closing came as a relief because we were all questioning our neighbours’ ability to handle a pandemic long before Trump’s latest antics and outbreak surges. But keeping the border closed month after month is a big deal for diplomatic, economic and social reasons. There are tensions and some Congress members are apparently pushing to reopen it.

Meanwhile, if Canadians could build a wall right now, they probably would. A friendly, temporary wall, obviously—but a wall nonetheless to shield ourselves from people who reopen Disney World when nothing is under control.

“Eh, it’s Independence Day today!” I noted when we arrived.

Feng was busy parking in a fairly empty lot just off Clifton Hill. In any other year, on a hot and sunny Saturday afternoon, we would have been driving around and around. But this is 2020, the cursed year—three guys were waving “$5 all-day parking” signs and directed us to a spot. One of them gestured for Feng to move closer to the next car, another visitor from Ontario like 100% of the cars in the lot. “Fuck it, that’s good enough. There’s plenty of room.”

The classic Niagara Falls experience starts at the top of Clifton Hill, the unofficial main street. This is where you’ll find all the “attractions” that have nothing to do with the falls and everything to do with making money off a free world-famous landmark—there’s The House of Frankenstein, the Upside Down House, Niagara Falls Fun Zone (laser tag), Niagara Speedway (a go-kart track), Ripley’s Believe It or Not!, Castle Dracula Wax Museum, Guinness World of Records Museum, Movieland Wax Museum, Louis Tussaud’s Waxworks—

“Actually, some of these places may be open,” I said. “We’ll see after the falls.”

There are also plenty of American chains like IHOP, Dairy Queen or the Rainforest Café, as well as options again designed for kids or stoned adults such as Crunchicreme waffle cone and the Fudge Factory.

If you made it down the hill, you’re safe. Well, at least if you’re not a gambler—I forgot to mention the many casinos but this time it’s true, they are closed because of COVID.

So basically, if you linger on Clifton Hill, bring money and maybe grab some pot from a cannabis store—I’m sure the place is hilarious if you’re high.

Okay, you’re now on Niagara Parkway. On your left is the Rainbow International Bridge to the city of Niagara Falls, New York State. To your right is the parkway you can follow to see the falls and fall-related attraction. It’s about a 1.5-kilometre walk to the most impressive viewpoint over the Horseshoe Falls.

I’m not new to Niagara Falls. My first visit was in 2005, when we eloped and got married in a nearby wedding chapel. It closed a few years ago, which always makes us laugh—we lasted longer than a worship place.

I came back a few times after that, including in 2011 with my brother and my mom and once with baby Mark in 2013. The parkway is usually packed with tourists but we were almost alone. Surprise surprise, without American, Chinese and Indian tourists, Niagara Falls is dead quiet.

Things seemed different on the other side of the Niagara River—we were a handful of Canadians practising physical distancing while viewing platforms looked packed in the US, a perfect illustration of the ways the two countries are responding to the crisis.

On the way back to town, we stopped at the haunted house where I was voluntold to go with Mark. He was genuinely scared and almost took the “chicken exit” but we were saved by my phone’s flashlight. At least, it was money well spent.

If you’ve never been to Niagara Falls, keep it on your bucket list. To me, its unique features are the blue glacier-like water, very different from many rainforest waterfalls, and the viewpoint over the Horseshoe Falls edge.

If you’ve been there before, make the trip special. Bring someone who has never seen the falls, go in winter or… yeah, a pandemic will do as well. 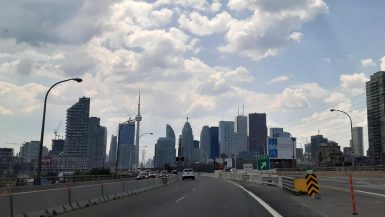