A Quick Check on the Southern Neighbours – Ogdensburg, NY

I have a weekly gig as the perfect suburban housewife.

Saturday afternoons are the only time of the week when I’m alone at home for a few hours—Mark is usually at my in-laws’ being force-fed Chinese food and Feng is running errands. The show begins after a cup of coffee and a walk around the neighbourhood. I vacuum, clean the bathrooms (plural, welcome to Canada where family members don’t share toilets for mysterious Canadian reasons), mop floors, dust shelves, do laundry, find random stuff under the couch and reorganize the kitchen. Then call my mum on the way to the gym for a 5 p.m. Zumba class. When I get home, I organize the laundry and cook enough meals for a couple of days. If Feng and I still have energy, we go to the movies. Most Saturdays, we end up catching up on work instead.

Yesterday I was getting ready for yet another exciting Saturday afternoon when Feng came downstairs.

I paused. On one hand, cleaning, Zumba and more chores. On the other hand, hanging out with Feng and crossing a border.

We rushed upstairs and grabbed our passports, phones and some US dollars—every Canadian household has a stash of US dollars in a drawer, memories of the years when the Canadian dollar was at par with the greenback and cross-border shopping trips were the chance to find good deals.

We used to go to the US several times a year as well, not so much for shopping but mainly for the chance to spend the day “abroad”. The cities just across the border aren’t that exciting—there’s a huge difference between New York State and New York City—but still, the cultural differences are always entertaining and it’s fun to see something new, to be somewhere else.

Our last trip to the US was in 2017. We didn’t feel like crossing the border under Trump, especially as two born-abroad Canadians with many passport stamps, including old Chinese visas. The atmosphere was too toxic in the US, no point in being questioned at the border or going through unnecessary hassle just for a day trip.

It only took us an hour to get to Prescott, on the north shore of the St. Lawrence River. Then we took the Ogdensburg-Prescott International Bridge and arrived at the U.S. Customs and Border Protection facility.

Crossing the land border between Canada and the US is never a relaxing experience. You stay in your car and the armed officer towers over you, firing questions, your passport in hand. “Where do you live?” “Where are you going?” “How long will you be there?” Trick questions can be added to the mix. “Are you married?” “When did you get married?” “Whose car is this?”

You don’t even get a passport stamp for the privilege of passing the test. At most, you’ll hear “have a good day!” which means “get lost, like now” in border officer lingo.

We didn’t go far into NY state this time—we stopped in Ogdensburg, population 10,000, home to the St. Lawrence Psychiatric Center and two correctional facilities. We went to a couple of grocery stores to compare prices. Dairy and meat were cheaper than in Canada, produce was as expensive, no empty shelves. Over-the-counter children’s medication was available so we bought a bottle of Tylenol (shortage issues in Canada, impossible to find).

We spent the rest of the afternoon walking along the river and exploring the town. There isn’t much going on in Ogdensburg but strangely enough, it didn’t change much after four years of Trump and two years of COVID. Houses look a bit more run-down, cars a bit older, but that’s about it. Maybe Ogdensburg is the kind of town that never really changes. It’s quiet, almost eerily so—”feels like one of these places where zombies attack after dark”, Feng joked. He may be right, the cemetery was huge.

We spotted bored teens working at the Tim Hortons, families hanging out at the park by the river, elections signs for a slew of local races, pickup trucks with “right to bear arms” and “police lives matter” stickers, tons of American flags, and a series of small cultural differences that made us laugh, like the fact it was 75 (Fahrenheit) degrees.

Then we took the bridge back to Canada and answered another series of questions at the Canada Border Services Agency facility—“Masks are mandatory” “ArriveCAN is MANDATORY!”

“Where did we go?” “What did you see?” “Are you bringing any cannabis with you?” “Did you pick up packages in the US?” “Where are you going now?”

Yes, they let us back in, eventually, thank you for asking. We went as “Mötley Crüe” and “Pink Floyd”, maybe we didn’t look like honest citizens…!

Fort Wellington, Prescott – Once, There Was a War… 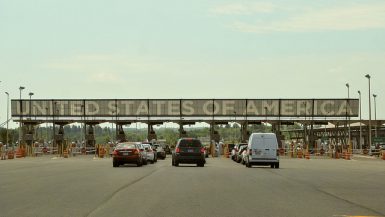 10 Realistic Tips to Americans Interested in Moving to Canada 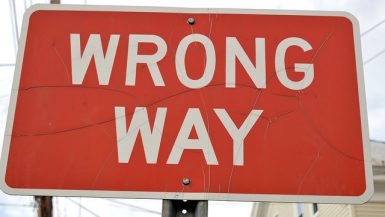