The Thai Adventure – Crossing the Overland Border Between Malaysia and Thailand

My motto has always been “travel the world, take pictures, eat chocolate,” but I’m strongly considering changing it for “you haven’t lived till you’ve taken a bus that runs out of gas in the middle of the freeway.”

Well, it all started around 11 a.m., in Pulau Langawi, Malaysia. We checked out and took a taxi—there is no public transport on the island—to Kuah, where we bought two ferry tickets to Satun, Thailand. We even got a two-for-one special and only paid $10 for them. We exchanged our last Ringgits and cleared Malaysian customs.

It took us an hour to reach Satun. We were granted a 15-days on-the-spot visa and got a brand new stamp in our passports.

We jumped on a local taxi, i.e. the back of a pick-up truck where ten passengers, including a baby, managed to fit, and we were dropped off at the bus station. Surprise surprise, it’s much harder to get by in Thailand speaking only English, mostly because everything is written in Thai. And well, I speak French, English, Mandarin, okay Spanish and passable Portuguese but I do not speak Thai.

We eventually understood that the bus to Trang, our first stop in Thailand, was at 2:30 p.m. and our guidebook said the trip would take about 90 minutes. Shortly before 2:30, a bus pulled in front of us. Feng and I looked at each other and thought the same thing: “chicken bus!”

The bus reminded us of Central America’s local form of public transportation, old school buses shipped from the U.S.A. and then brightly painted and decorated to the local taste. They are nicknamed “chicken buses” by travellers because they carry just about anything, from humans to animals, and it’s not rare to travel with a bunch of chickens on market days.

Granted, this Thai bus didn’t seem to carry chicken (although they were quite a few cockroaches running around) but it looked exactly the same—small seats, bright colours and tons of good-luck charms and colour-faded pictures hanging by the driver’s seat. A few fans were attached to the ceiling and most windows, as well as the doors, were open to cool off passengers. As soon as we sat down, the driver played with the stereo settings and Thai pop music started blasting in the speakers, right above our heads.

The bus left relatively on time but it soon became obvious it would take much longer than 90 minutes to reach Trang. We were stuck in traffic, and the driver was stopping every 500 metres to pick up passengers. An hour went by, then two, and three.

I was getting really hungry: we only had a piece of bread for breakfast, in Malaysia, since we had figured getting to Trang would be easy. When the bus stopped for more than a minute, I bolted out and grabbed a Coke from a food stall. Meanwhile, Feng had managed to pinpoint where we were on the map: not even halfway.

Passengers came and went, sometimes the bus was full, sometimes we had more room. The music kept on playing and the driver even turned the small TV on: we could now watch the songs’ music videos. Yay. Trust me, there is nothing wrong with Thai music but it does get tiring after a few hours.

The sun was beginning to set when suddenly, the bus drifted toward the shoulder of the road. The music went off and we slowed down. And with a last roar, the engine died. The driver laughed, got off the bus, and inspected the engine. No more gasoline.

He left on a motorbike that had appeared from nowhere and came back ten minutes later with a plastic jug of water, presumably filled with gasoline. But the engine still wouldn’t start. Were we all gathered on the shoulder of the road and some passengers started to hitchhike.

The driver left again and this time came back with a red toolbox. He opened it and the tools all fell on the road. Patiently, other passengers picked them up and put them back in the toolbox. It was pretty obvious nobody knew how to fix a bus.

More gasoline eventually did the trick. After a few agonizing puffs, the engine started again and the exhaust spilled out black smoke. We were good to go, even though the whole bus smelled of gasoline. Ten minutes later, the bus pulled out at a gas station. Without turning off the engine—it may not have started again!—the driver filled up, a cigarette dangling from his lips. I’m telling you, this was a suicide bus.

We eventually made it to Trang at around 8 p.m., the trip had taken close to 6 hours. We were hungry, tired, and smelled of gasoline. But at least, we had a story to tell. 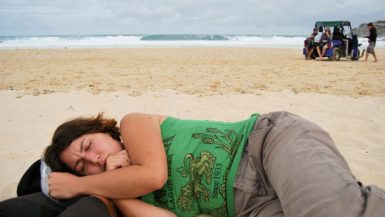 Australia, Singapore, Malaysia and Thailand 2010-2011Exploring the US