A Largely Eventless (But Very Canadian) Back to School Day

You can’t trust retail for timely seasonal reminders—supermarket shelves and endcaps were already overflowing with back-to-school supplies in July, right after Canada Day. Rather, the first sure sign a new school year was going to start was the noticeable increase of pointless, irrelevant and often grammatically questionable emails from the Principal’s office. I knew everything about paid lunch box programs, kindergarten staggered entry, staffing changes, upcoming board meetings and the school’s new building completion before September 3 and none of it was relevant to us.

Frankly, all I needed to know was where and when I should drop off Mark on his first day of Grade 2. Instead, I received a very long “First Day School Procedures” email full of exclamation marks, bolded words and underlined sentences. A confusing map with A-H meeting areas for each grade level was attached—I failed at deciphering it. As for the “when,” we were both hoping school was starting as usual at 8:30 a.m. and not at some weird, random time announced in an email we didn’t read.

On Labour Day, we accidentally spent the last few hours of Mark’s summer break in a quintessential Canadian setting, complete with groundhogs, geese, bugs, canoes and fresh water. We ended up in Hog’s Back Park, locally famous for a series of artificial cascades on the Rideau River. We hopped from rock to rock to get close to the bottom bowl and we just stood by the river, looking at the waterfall and the ducks.

The next morning, the three of us drove to school.

Feng and I have an agreement—he’s responsible for regular driving duties and I handle social situations. First day of school is potentially a social situation because hundreds of parents show up, so I was sent with Mark to find the right meeting spot at 8:20 a.m. Feng couldn’t wait in the car, the residential streets around the school are a “no parking” area and two police officers were having a field day.

There were three handwritten lists of students taped to the building wall.

“Mark… Mark… Mark… Oh, here you are. Mark P. Hi, I guess you will be Mark’s teacher?” I asked a woman who seemed to be in charge of his class.

Right. Wait, what? I mean, I’m sure there was a perfectly valid reason why she wasn’t there, but I’d say that when you’re a teacher, showing up to the first day of school is pretty high on the job requirements list.

Grade 2 kids are school veterans. None of this crying nonsense, they all look stylish and relaxed.

Last year, the first-day process was conducted in French because the kids were starting French immersion. However, because none of them actually spoke French, it was complete chaos. This year, the language of choice was English which speaks volumes about French immersion. Merde.

Mark immediately found a friend and they started chatting. I was dying to know what they were talking about but a woman to my right was shouting in Russian and two parents to my left were shouting in Chinese. I don’t speak Russian, so I assume the very loud instructions were along the line of “eat your lunch.” As for the Chinese, they were telling their son to give the camera a big smile.

I didn’t have any last-minute tips for Mark. I knew he wouldn’t eat his lunch. I didn’t have my DSLR, just my phone camera to take a picture of Mark, yellow hoodie and missing front tooth, standing tall but probably nervous.

The kids promptly forgot about us and I’m pretty sure I saw a couple of them blatantly ignoring their parents trying to say goodbye.

I refrained from shouting “I LOVE YOU, MARK! REMEMBER TO GO PEE AT RECESS TIME AND EAT YOUR LUNCH!” I means, it’s a K-12 school, I don’t want him to be known as “the kid whose mom reminded him to use the bathroom at recess” until he graduates. 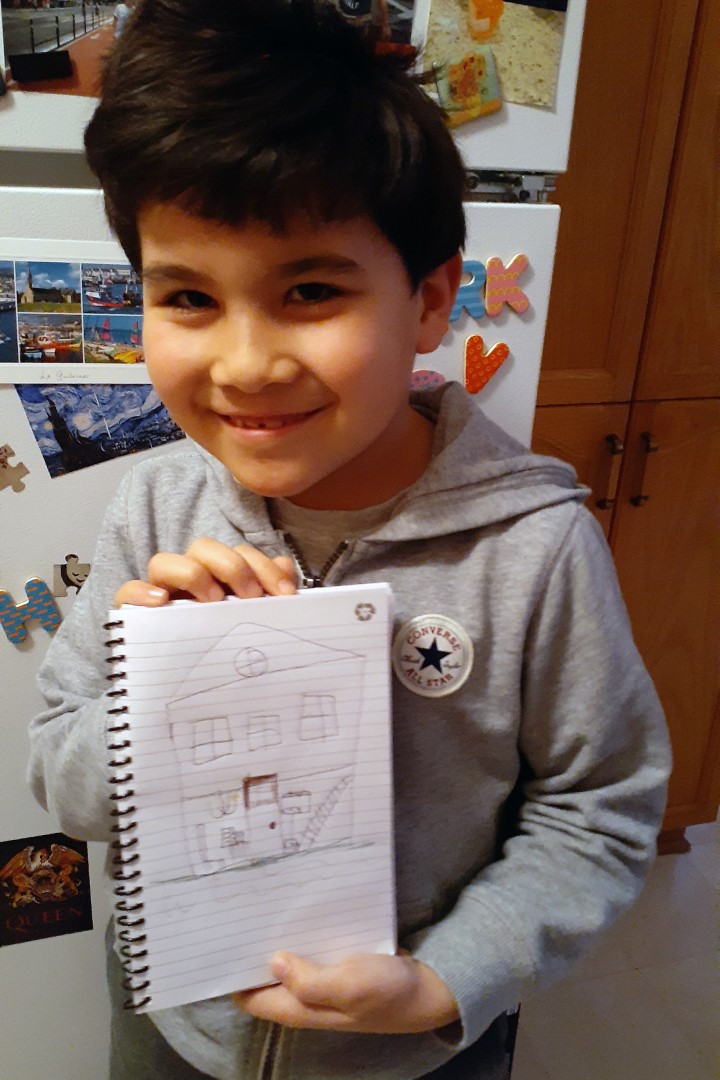