Hello, World, Are We Scared Yet? (This COVID Thingy Makes Me Feel Uneasy…)

Feng sighs. “Good. Same old is great. I’m happy if nothing else changes.”

“Oh, fuck… what again? I know about the US travel ban, but I haven’t checked the news since this morning. I was busy trying to withdraw Chilean pesos since every fucking bank has burned down, is closed or both.”

“Where do I start… stock market is crashing, Sophie Trudeau tested positive, all events are cancelled… oh, and apparently, schools are closing too.”

“What? I know France has just closed all daycares, schools are universities—I had my mom on the phone, she is starting to freak out. But I didn’t receive any email from the school board!”

“I think it’s not official yet.”

“Damn. Oh, wait. No kidding, just got the email. You’re right, schools are closing until April 14. But… how are we supposed to do? And kids have to go somewhere, they’re not going to stay home for three weeks!”

Here I am, entertaining you with travel adventures, probably sounding like a complete airhead with my non-virus-related stories from South America.

But I’m worried too, I’m freaking out too.

I have been relatively sheltered compared to you in Asia, Europe or North America because South America was spared until three weeks ago and I purposely disconnect from social media when I’m travelling. Yet, I read the news, both local and international, plus I get daily updates from Feng and weekly ones from my French family.

Apparently, it’s more or less the end of the world and we’re running out of toilet paper.

Anyone with a large supply of hand sanitizer bottles, wipes and “kill 99.9% of germs” products is now sitting on a gold mine.

There’s no grownup in charge and we have no clue what to do.

Initially, I was more scared about the direct and indirect repercussions of China being on pause than the virus itself. Of course, I cared about the well-being of Chinese citizens but I was also confident the government would manage—don’t ask me why, a mix of the 2003 SARS epidemic experience (relatively okay ending, right?) and authoritarian regime with methods that can be very efficient in such situations.

I remember thinking the coronavirus could have spread abroad quickly, considering a potentially large population of Chinese immigrants who may have spent Chinese New Year back home—surely, plenty of Chinese-Canadians, Chinese-Americans, Chinese-whatever had no idea they could be “importing” the virus to other countries.

I remember being surprised to hear Lombardy had a serious outbreak—my money would have been on places with larger overseas Chinese populations like Thailand, Malaysia, the USA or Canada.

I emailed my brother who had spent the Valentine’s Day weekend in Italy with his soon-to-be-a-doctor girlfriend—“Hi patient zero, was it romantic last-minute getaway or an epidemic research project?” (They are both fine and obviously, they couldn’t have predicted the outbreak…)

We all worried when my sister, who lives in Paris, got the flu. It was actually just the boring, regular flu.

“People are going kind of crazy here,” Feng warned me when I was in Rio de Janeiro, over two weeks ago.

Except for the fact Brazil, Argentina and now Chile had run out of hand sanitizer bottles and face masks, I hadn’t seen anyone using either… and both items aren’t as easy to find as in Canada in the first place. Things were—and they still are today—fairly normal. Well, Santiago is rioting but that’s another story.

And now I just wish we could reboot, update and start 2020 fresh again without the blue screen of death.

Are you feeling the same?

“But why are schools closing?” Mark asked me last night. “It’s not like kids are dying from the virus… right?”

The “right?” meant “please tell me it’s not that bad” in Mark’s language.

I feel like asking the world the same innocent question, fishing for comfort—“Is not that bad, is it?”

When something bad happens, it can be useful to share with outsiders to get a different perspective. But right now, we’re pretty much all in the same boat so it feels like an echo chamber.

In a way, current events remind me of 9/11. My own perception is probably skewed because I had just turned 18 and it was the first major global event that affected me indirectly—plus I had just graduated from high school and geopolitics classes were still fresh in my mind—but we were all scared. For a few weeks and even a few months, we had no idea what was going to happen and we knew whatever would happen wasn’t going to be good news on the short—and long-term.

But the world didn’t stop despite all the errors made and all the shitty things that happened in the following years.

That’s as optimistic as I can be right now. 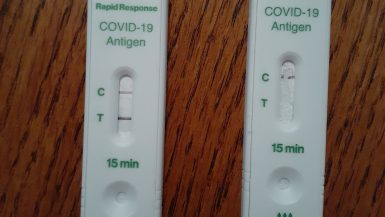 One, Two, Three, We Are a Weird COVID-Mystery Family 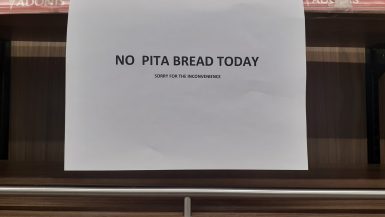